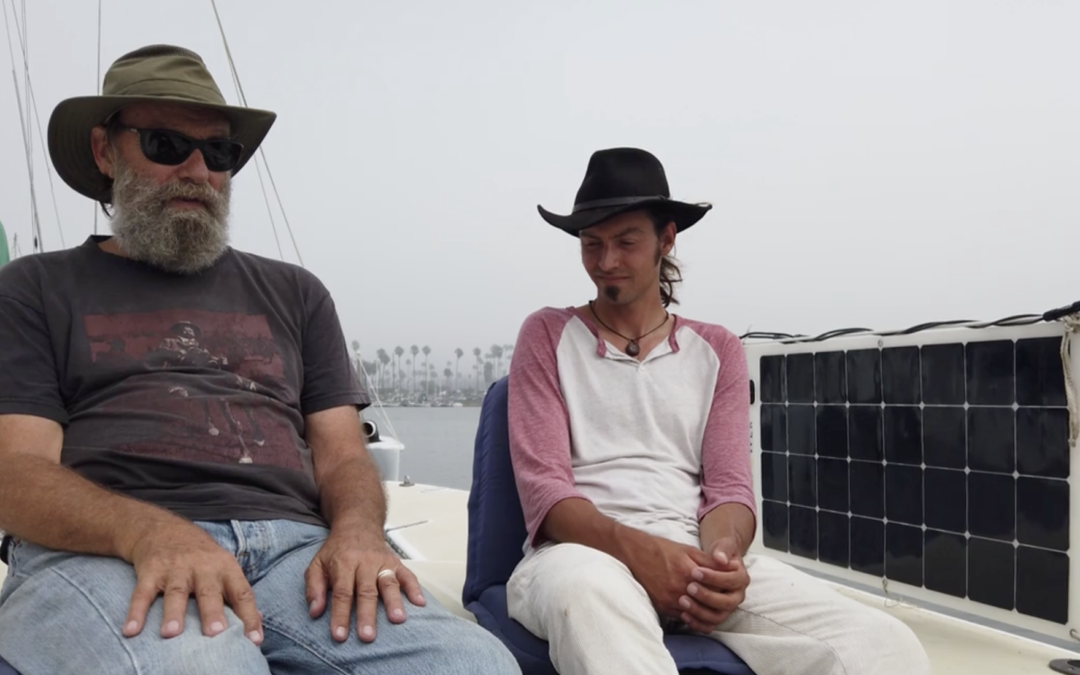 “I have the incredible honor and privilege of knowing this family as dear friends. I was so excited when they invited me to their solar-powered boats – two beautiful trimarans – for an interview about how they use their vessels as a model for off-grid living. In my conversation with Jay and his son, Wes, we discussed the history of sailing in both the Atlantic and Pacific, their personal story of sailing, and what draws them to the ocean. The main focus was on alternative energy solutions, and self-sustaining systems provided by their boat. They showed me how their technology works and how it has evolved over time, making these systems even more efficient. This story is a great example, proving solar energy as a viable option for long-term savings.”

As a young boy, Jay was introduced to sailing by his father. He continued this practice as a teenager, until joining a 20-person crew on a larger vessel. Jay, naturally, passed this practice along to his son, Wes. Wes has never known life without a boat and spent much of his childhood at sea. They are both drawn to the pace of the ocean, and to involvement in sailing. Together, they’d explore new land to interact with the natives. Exploring the coasts, and the life therein gives them the gift of learning about different cultures. Jay and Wes described these cultures as community-oriented as well as mentally, emotionally, and physically healthy. Traveling by solar-powered boat, they were able to take their home with them everywhere they went!

Today, their family also runs a solar business, Sun Pacific Solar Electric, out of Santa Barbara. Having previous experience has made the setup of these systems very straightforward for them. Solar technology has been commercially available since the 90s. Advances in technology, as well as legislation, have made solar power increasingly accessible, efficient, practical, and financially feasible for Americans. For example, there is a Federal Tax Credit for installing solar panels, that was launched in 2016. It gives consumers a percentage of installation costs back if they owe taxes. Wesley explained the benefits of an electric motor, as compared to a gas-powered motor. They’re quieter, more efficient, with zero emissions, and manufacturing is cheaper. Solar power generated from his panels is stored in a battery that can pay for itself in 5-6 years of use. While it has a higher initial cost than most gasoline-powered motors, it doesn’t require gasoline nor requires the same level of maintenance. Thusly, long-term savings offset costs and eventually guarantee a profit.

Naturally, these sailboats are primarily wind and tidal-driven. However, there is an abundance of other factors that go into their sailing trips. Food is about the only thing they didn’t worry about becuase they were able to stock up when they landed every couple of weeks and had a large refrigerator. Not to mention, they were surrounded by fresh seafood, which they captured to supplement their diets. Jay’s vessel even has the capacity to generate its own freshwater source and power, via a desalinator paired with solar panels. Their solar panels also power all modern conveniences like their music, DVD player, and navigation equipment. On Wes’ vessel, a solar-powered electric motor is hooked up to the 12 space-efficient solar panels, lining the lifelines at the edge of his boat. They can generate up to 1,300 watts per day, which are stored in the battery. That’s enough energy to motor the entire boat for about 12 miles when the wind is scarce.

For cleanliness, there are solar-powered showers on board. Basically, they are heavy-duty black bags with hose ends that sit in the sun for a couple of hours, until they gather enough warmth to be used. Next, they would like to start using solar ovens, which would decrease the need for propane for cooking. Again, this hobby represents a different pace of living.  Everything is done slowly because it’s occurring naturally. Water boils in 45 minutes and can cook anything in 2 hours. This teaches patience and humility. More than that, this lifestyle represents self-sufficiency. They do not rely much on any one system, as they supply their own needs. When they do land for food, they enjoy the often neighborly culture associated with harbor life. There are many fishing villages abroad, which provide a network to exchange work materials and labor.

Truly, their story is inspiring! In our conversation, on the deck of Wes’ boat, I felt the slowness of time and calm. As I spoke with Jay, he mentioned that he looks forward to the day when he can retire and sail the world. Then, he can connect with ocean-dwelling communities in South America, while spreading the gift of solar power. This will teach others how they can sustain themselves. What truly remarkable intentions! We wish them the best in their ventures and hope to learn from their values, as a company. One of BarrierEnergy’s goals is to improve energy efficiency in the world. Sharing stories like these spreads knowledge to empower people. Learn more about BarrierEnergy and what you can do.