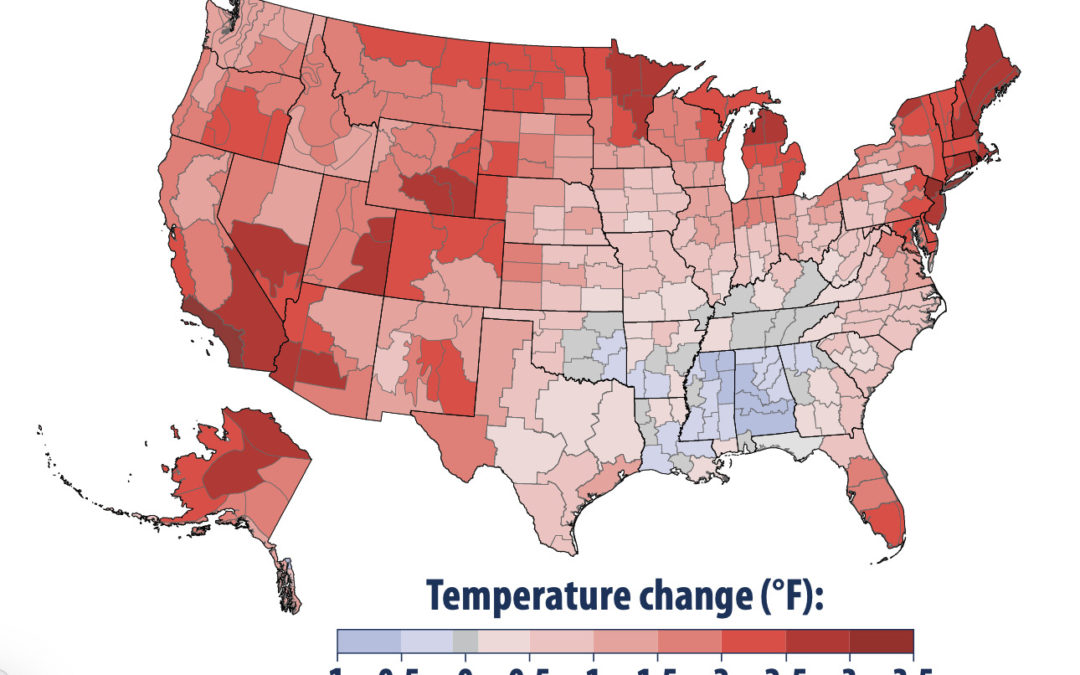 The effects of climate change are sadly evident on California’s Coastline. With most of California already being a desert, you can imagine how global warming exacerbates problems. Southern and Coastal counties are the most vulnerable to the consequences of climate change, coming from each direction. Temperatures are increasing, sea life is suffering, and water levels are rising. Let’s take a look at how these changes affect the state of California.

It’s Getting Hot in Here:

On Average, Southern California has warmed almost three degrees Celsius since 1895. Ventura County is taking the lead as the fastest-warming county in California, with Santa Barbara is following close behind. Both counties lie along California’s coastline. Three degrees may not sound like much. However, when you think about what a three-degree fever feels like, you can start to understand. The earth and its environments rely on homeostasis for replenishment, just like our bodies do.

Increased temperatures mean worsening droughts. These droughts have depleted water reservoirs for daily life and agriculture. Droughts also contribute to natural disasters. In peak hot seasons, Pacific Gas and Electric has resorted to turning off power for massive populations to prevent wildfires. When California’s residents need electricity the most, they are being put into very dangerous situations. Not to mention, many people’s livelihoods have already been burned down. Thousands of residents have been evacuated relocated. Without drastic measures, everything we love about our Golden State could change.

Oceans help keep the earth cool by absorbing heat. The problem is, our oceans can only do so much. Ocean temperatures along California’s coastline have risen half a degree, on average. As water temperatures escalate, the whole food chain suffers. Many species must relocate themselves to accommodate their bodies’ specific needs. Nutrients are harder to come by, creating more competition. Migration patterns and life cycles are thrown completely off balance. Those who cannot adapt die off, and millions have. That means limited seafood production.

Plantlife, specifically algae and coral reefs that are responsible for a majority of the planet’s photosynthesis, which produces the oxygen we breathe. These two species work together to clean our oceans, feed sea creatures, and regulate temperatures on earth. Due to temperature increases, ocean water in the pacific is turning acidic and killing California’s coral reefs. Half of the coral reefs on the planet have died, and more are on the brink.

In tandem, red algae are blooming at an all-time high. Red algae and a lack of coral creates dead zones in the ocean. Dead zones are areas in the sea with no oxygen. Unbeknownst to many, ecosystems in the sea also need oxygen to survive. We’ve all seen the horrific pictures of oceans flooded with dead fish and beaches covered in dead sea lions. Even the birds are getting sick from eating contaminated seafood. We also can’t swim in our own oceans when red algae bloom because thriving bacteria eat our flesh. Yikes, that’s no good for tourism along California’s coastline. Remember, land and sea work together to maintain the fragile balance of our ecosystems. If these graphic damages cannot wake us up to our impending doom, I don’t know what will.

Say Goodbye to the Beach:

As ocean temperatures rise, so do sea levels. California is known for sprawling, beautiful beaches. In fact, the view plus outdoor activities account for much of the tourism and property value. Unfortunately, all of this is threatened by rising sea levels as ice caps melt. On average, sea levels have risen eight inches in the past one hundred years. Once again, this might not seem like that big of a deal. It might shock you to know that is enough to damage coastal highways, bridges, commercial properties, and residential homes. Floods and mudslides are joining in on the destruction of million-dollar homes and beaches. For every new seawall that is built-in attempt to stop this, beaches are sacrificed, and lives are put in danger. The state has already spent six billion dollars trying to fight against Mother Nature, who’s winning by the way. Potential destruction could account for billions of dollars more in repair.

California’s coastline is also facing serious erosion. These rapidly eroding coastlines are caused by waves at high tide and increasingly damaging storms. Natural disasters such as hurricanes rely on warm water for fuel. Cliffs are literally falling apart, which homes are built on. That’s right, homes are dangling over edges as we speak! Can you imagine saving up your whole life for a million-dollar property on the beach, then being forced to relocate? Sadly, the speed of rising water is only increasing. At this rate, it’s projected to reach six more inches in only fifteen years. Think about the impact of a one-hundred-year storm surge, occurring every decade. That’s where we’re headed. We can’t even conceive of the consequences of our collective actions.

California is more than well aware of these threats. They are fighting to defend their booming economy and luxurious lifestyles. Thanks to the new legislature and the California Energy Commission, steps are being taken to slow climate change. California’s goal is to go completely to Zero Net Energy by the year 2050. That means the state will no longer be contributing to greenhouse gases. Together we can prevent any more damage to our environment, and even reverse what’s been done. Various compliance tests are mandated to prove residents are following the strict regulations made by California state. BarrierEnergy is doing its part to combat global warming as a company providing building compliance testing. Now, you know why it’s so important to protect California’s coastline.